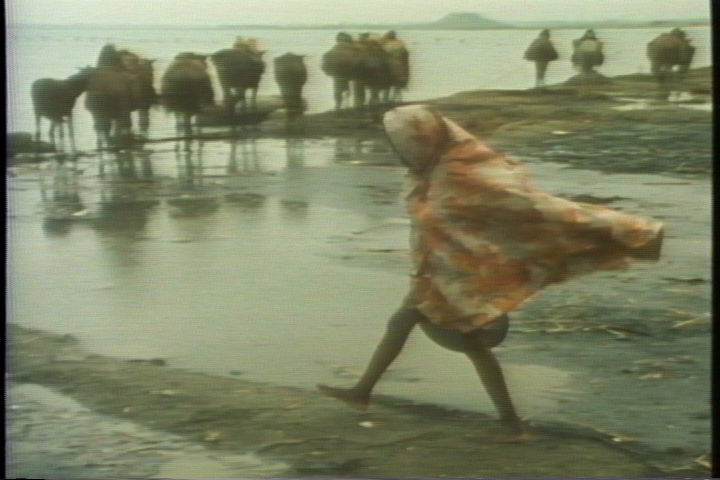 With a haunting soundtrack and startling and exclusive images, Krik? Krak! draws viewers into  the impoverished, seemingly tranquil landscape of Haiti. Yet the brutal yoke of Duvalierism is soon revealed. Wielding machetes, the despots’ Tontons Macoutes ravish the scant possessions of peasants eking out a mere dollar-a-day on a land too parched to subsist on. Pervasive spies keep villagers on constant guard. And certain Voodoo priests, collaborating with the regime, subdue them with spiritual control. With support of armed thugs, factory and plantation owners grow fat off their back-breaking toil. To compound their enshackling burdens, the rulers reap multi-millions from the national coffers.

As villagers seethe over these harsh conditions that exacerbate their struggle to survive, shocking hallucinations invade their thoughts. These visions evoke enigmatic traditions. They recall refugees languishing in INS camps and ancestors brutalized by slavers, US Marine invaders, regime torturers and plantation guards. And the visions revive the people’s acts of resistance, Created in a stream-of-consciousness style intercut with daily life and historic events, these startling visions are shown as they fuel the people’s will to resist in their homeland and to set sail on flimsy, overloaded boats for American shores on a continuous journey, one that is freedom bound.

Yet we see in Krik? Krak!, from Haiti’s revolution onward to Duvalier’s fall, corrupt forces cyclically re-emerge to thwart the people’s freedom quest.

While focusing on the roots and effects of the decades of Duvalierism, the film paints a portrait that is:  “A remarkably insightful, original, compassionate picture of the eternal Haiti” (Graham Greene at Cannes Film Festival).

The film travels beyond the rare and occasional headlines of decades, if not centuries of neglect from the outside to the struggle inside, to encounter the hidden forces driving a people in search of freedom — a highly elusive and ultimate goal. The film portrays this insightful tale in a style, acclaimed in Aperture’s prestigious journal to be:  “an intriguing.…haunting…magical…[and] shocking…brilliant stream-of-consciousness.”

A Production of Mountain Top Films