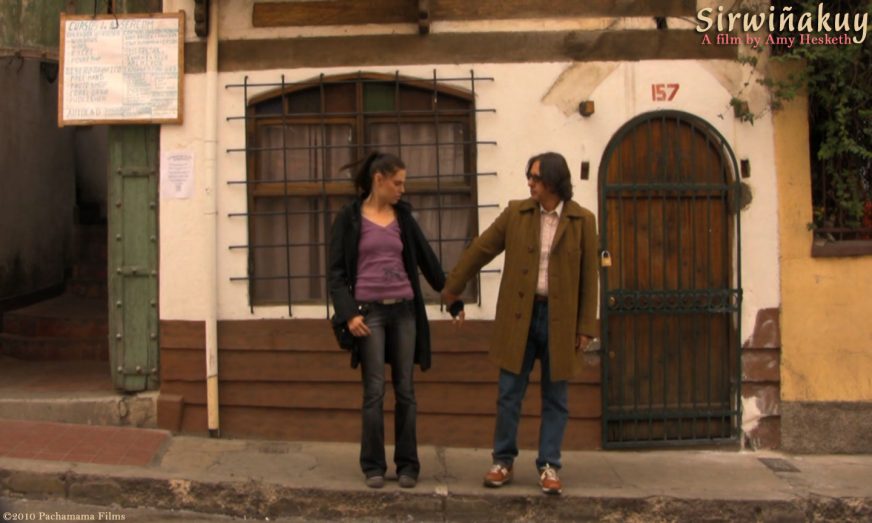 “What is most significant about this remarkable film from 2010 is how completely director Amy Hesketh absorbs and makes cinematic conventions her own, breaking them at will, such as her insertion of sped up footage though back streets to bridge scenes, as opposed to standard editing practices. Though her approach is an exercise in masterful storytelling, she boldly turns to documentary techniques when her fiction leads to an open Andean market, where whips are sold as common merchandise. Despite her employment of cinematic narrative traditions, her approach is also symbolic, with the Andes, whose culture she drew upon for her basic premise, hovering over the landscape in the background, and in red high heels that represent Woman’s sexual nature.”  CHARLES LONBERGER

Anouk is French, she’s 30, she’s in Bolivia. A massive demonstration is taken place outside the charming café where she’s talking to a friend.

Luis, Bolivian, 50, is observing her terrible table manners. His companion won’t shut up about his travel ordeals. When they are both alone, Luis approaches Anouk and simply asks her to go with him. She does.

Luis takes Anouk to her rented room, asks her to pack her things. She does.
Anouk moves in with Luis. She doesn’t quite understand why she’s in an old house full of books, antiques and crumbling walls, with a man almost twice her age, of whom she doesn’t even know his name.

When he spanks her, her curiosity grows, she wonders how far she will go.